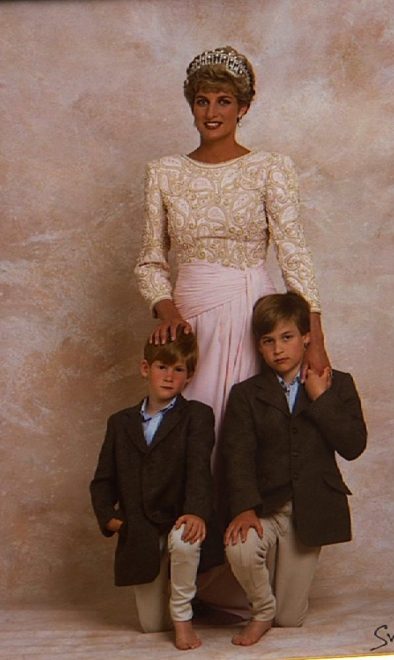 Exclusive A photograph of Princess Diana and her sons which has never been seen before The picture was produced unexpectedly by an aide to society photographer Lord Snowdon, former husband of Princess Margaret. The photo, taken by him, shows Diana posing formally but with a radiant smile as young William and Harry kneel glumly and barefoot before her. But what is the explanation for the childrenŐs gloomy expressions? It appears that the boys had become bored with their motherŐs studio photo-shoot and had wandered off for a bite to eat at the end of the sitting. When they returned out of curiosity to see what was still going on, they were hauled unwillingly before the camera yet again. ŇIt really is fantastic. ItŐs an odd one, because the boys are dressed in sort of country casuals and don't have any shoes on, and their nanny has not given them any socks as far as I can see. But the Princess of Wales is dressed up to kill!Ó SnowdonŐs personal assistant, who gave her name only as Evelyn, responded: ŇThis was at the end of the sitting. The boys were still dressed. ŇThey had gone off to have their supper and Mummy was carrying on with the photographic sitting, and the boys literally rushed in to see what she was doing.Ó Clive asked: ŇSo Mum went out of something casual, slipped into something formal and got the boys in?Ó ŇYes,Ó replied Evelyn, later adding: ŇI love the hand on Harry Đ a sort of ÔsitŐ!Ó Clive commented: ŇI love the story behind that. It shows how unstuffy she was.Ó Asked whether the photograph had ever been seen before, Evelyn answered: ŇNo, it's never been released.Ó (She explained: ŇI saw them when we were going through them. So I said, ÔIs it possible I could have a copy?Ő and he actually said, ÔYesŐ." Clive then asked: ŇSo do you think the royal archives have a copy of that?Ó Evelyn replied: ŇI wouldn't have thought so.Ó) She told Clive Faraher that she had been SnowdonŐs PA Ňon and off for 20 yearsÓ and that he had signed several of the personal prints with both Ň Snowdon Ó and ŇEvelynÓ. She said that her father, a solicitor, had also worked with Snowdon , explaining that he had taken the photographs of her as a thank-you for handling his divorces without charge. Snowdon, now aged 82, was divorced from Princess Margaret in 1978 and from Lucy-Lyndsay-Hogg in 2000. The woman said her employer Ňbecame a very good friend and he's Godfather to my daughter nowÓ. One of the pictures he took was of a young Evelyn in a small boat Đ just when she realised with alarm that it had started to sink. She told Clive: ŇIt was on a lake, and I said to Lord Snowdon, ÔIt's sinkingŐ and all he could come up with was, ÔWell you can swim, can't you?Ő And I did end up swimming, I have to say." Clive picked out a "really rather special" black and white shot of Princess Diana with baby Harry taken at the end of the prince's Christening. He said: ŇIt is so spontaneous. The Princess of Wales looks like a 1930s film star.Ó The expert was less impressed with a photograph of a formal picnic scene with Charles and Diana and the boys, describing it as Ňterribly posedÓ. Clive valued the signed picnic scene at Ł200 to Ł300, the christening picture at Ł500 to Ł800 and the hitherto unseen photo of Diana and the barefoot boys at Ł400 to Ł500. ©Exclusivepix, Image: 123874253, License: Rights-managed, Restrictions: , Model Release: no, Credit line: Profimedia, Exclusivepix

How Princess Diana Continues to Change the World

Today marks 20 years since the death of Princess Diana, but the impact she made on the world hasn't faded. ❤️